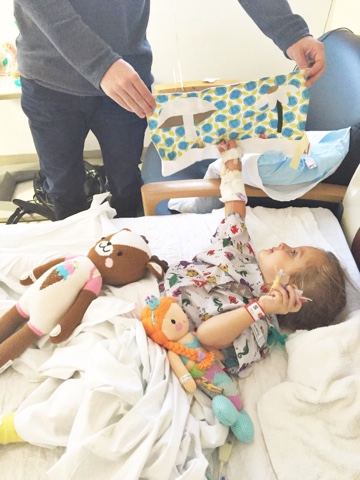 We were ready for you (or so we thought).  Given the Nature of Day 1, we were confident the worst was behind us.
We woke up to Daddy arriving, per the usual. No coffee this time because it was 6am and the Starbucks cafe doesn't open until like 8. Ludacris.
This is the morning that Fin is to lose her catheter and epidural + IV fluids. (Yaaaas! Lol.)  They gave us a really strong oral dose of pain reliever to relax her about 30 minutes before the Dr. Came by to remove the epidural.  Great. I handed it to Josh since he seems to be better at getting her to take the oral stuff.  He did. Success!
When the Dr. Showed up, she wasn't nervous. We log-rolled her over and he pulled it out, the morning nurse came in and pulled out the catheter. Not really a big production, but we distracted her like a mofo! Lol. All the toys and talking.
She was scheduled for PT in the morning and afternoon.  The morning PT was mostly just them showing me how to get her up off the bed and into the stroller, and vice versa. Nailed it first try. Basically I have to keep her spine as in tact as possible. So more of a scooping her up then picking her up. It's intimidating for sure. 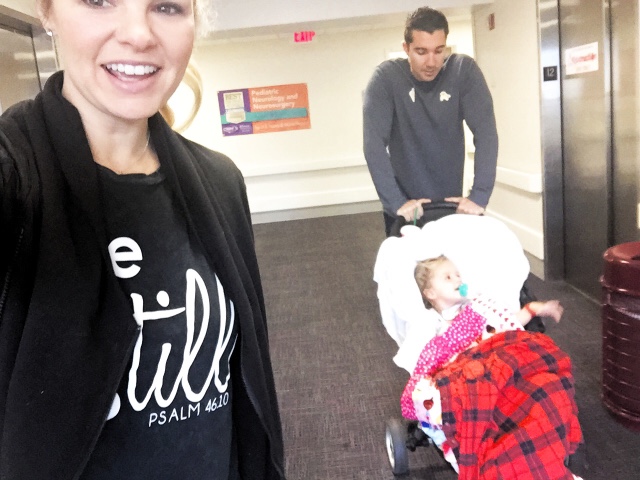 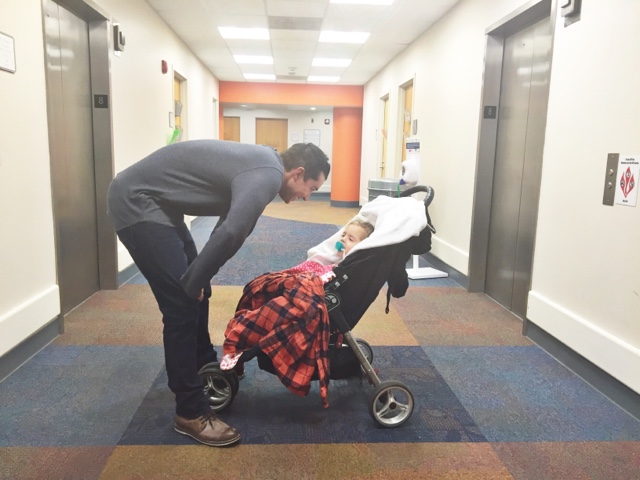 We got her in the stroller and we were breaking free! It was such a great feeling to have fresh air on our faces! We went straight to the zen garden. It was nice and chilly out there.  Finley was in a pretty great mood, given the circumstances. We ran into our friends, and sweet Charlotte had the biggest smile on her face. Everyone is doing well.  We talked about the last few days and both of our "horror stories" and laughed (nervously) that this day was supposed to be the worst. Welp. It was so far so good. 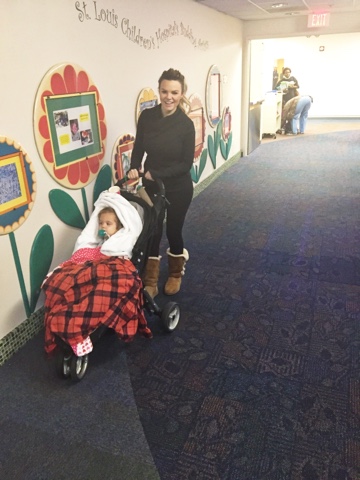 We were aloud to have her upright for about an hour, so we got back to the room and rested before afternoon therapy. I took this opportunity to run back to the hotel and get showered and cleaned up! 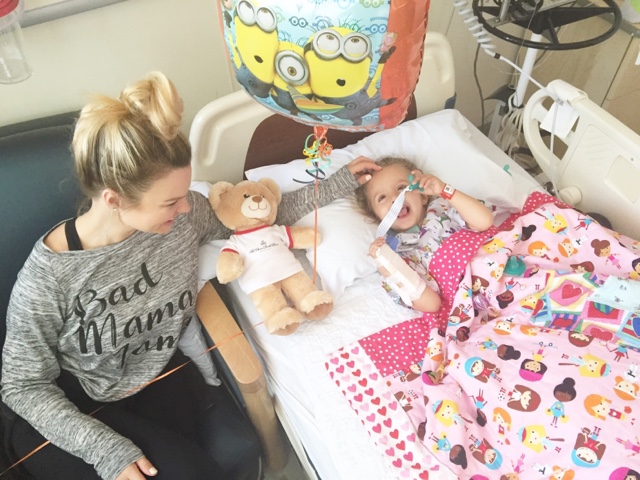 She was in the best mood still. Took a nice nap, and then we were up and ready for therapy.
Therapy went just as we anticipated, lots of tears. But she was so determined to play! So it was okay. 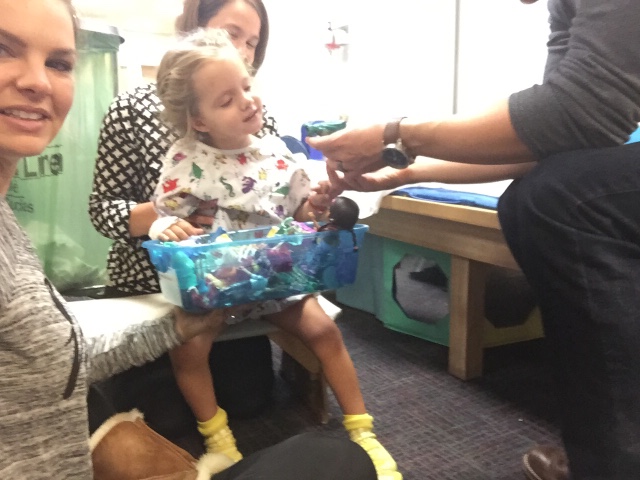 She seemed to be crying more out of anticipation or fear of pain, rather than actually from being in pain. We played for about an hour and got her to bear some weight on her legs, but she was very very weak. You can tell it took a lot out of her.
We got her back to bed, and she took a long nap. 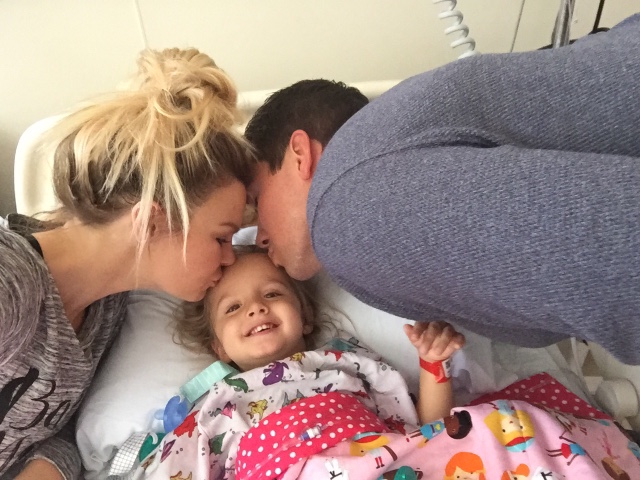 We just couldn't stop loving on her, we were so proud. It's possible we were subconsciously celebrating. If was 5pm and we'd survived with flying colors.
Our friends stopped by (they drove over FOUR HOURS) to surprise us! It was nice to see some familiar faces and catch up. They brought Fin lots of toys and she had a blast playing until she fell asleep.
Around 7pm I realized that Finley hadn't pooped yet. Since like Sunday, and it's Thursday. She was complaining of her tummy hurting, but I knew she would be afraid to push and put pressure on her back. She is no stranger to a little spit up while pushing poopoo out.
Around 7:15, she started projectile vomiting.  Josh had gone to grab some water, and all I could do was yell, "Help!!!!" I had to log-roll Finley on her side to not cause her more pain and so she wouldn't choke on her puke.  The log-rolling requires both hands.  It is where you put one hand on the shoulder and one on the hip and roll the body, keeping the spine in tact and not allowing any skin to twist. Because I had both of my hands on her I couldn't reach the call button. They came running in and helped me control the vomiting into a bucket.
I had done a lot of research... But when you are sleep deprived, exhausted, and panicked- all that knowledge of what to expect goes out the window.  I'd forgotten that vomiting is common post-SDR. My baby went from taking virtually no medication, to having a steady dose of lots of them via IV. That's bound to upset the tummy.
We got her all changed and cleaned up, which was super fun. Then Josh got in, I was making fun of myself for the way I was panicking and yelling, "Help!" Like I was in 'Life-Alert' commercial.
Just then, the pushing and puking happened again!! Josh and I both panicked. I don't know what it is about a bed-ridden child puking that causes sirens to go off in your head, but it does. We got her cleaned up again, and asked the nurses for a suppository for Fin. They administered it, little sigh of relief for us. 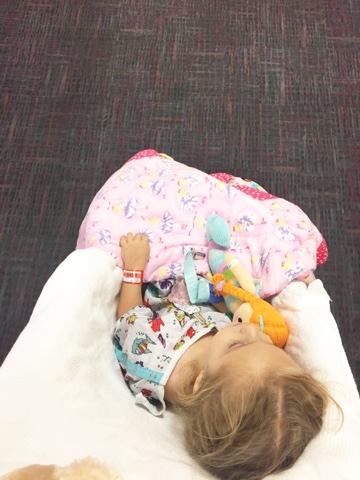 Finley started to push and cry. I felt like I was trying to coach her through labor. After what seemed like five hours, she finally pushed it out!! Holy smokes.
Mom and Auntie Pam were back from Dinner and brought us some yummy Mexican food.  We told them about the last two vomits and that Finley just gave birth!
We all chatted as Josh and I ate.  Some entertaining political conversation + some  psychological deep conversation.  Before we knew it, it was well past 9pm and we needed to get some rest.  When Fin goes to sleep for the night, mama needs to go to sleep for the night.
Given the last two vomits, I asked Josh if he would stay with me. I slept on the bed and Josh slept in the chair next to the bed. Just as we started to doze off, Finley started dry-heaving and vomiting again! What was causing this? I didn't feel like she was pushing anymore.  She might be dehydrated? She wasn't drinking much fluids? I don't know. So we asked for the IV fluids to get put back on. I just feel like undisturbed sleep is all she needs. It's just torturous.
We got smart this time, and after cleaning her up again, we laid some extra towels down. The nurses shift changed and just as the new nurse came on, Fin was throwing up again. Just a little bike this time. We gave her anti nausea and she got her midnight pain medication, and she drifted off to a peaceful sleep.
We are roomate free again, for now. Praying it stays that way. Not to be anti social, but just want this girl to sleep. And I would love some too.
Posted by Fifi + Mo at 10:18 AM