For the record, I really want to title this, "the day from hell". But they say that the worst day in the whole healing process is day 3. So, I guess we'll wait for our impending doom. 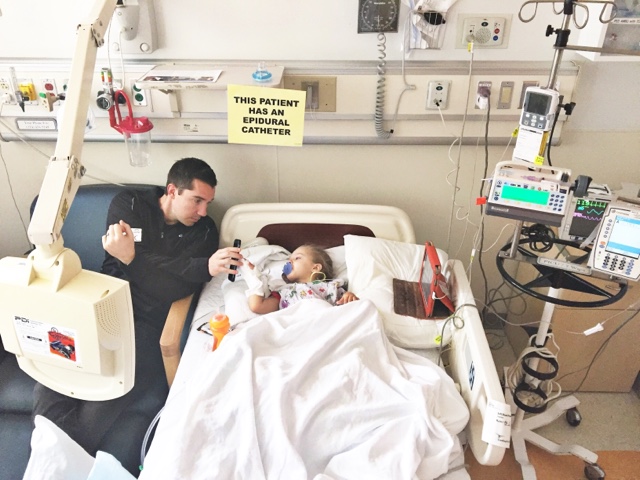 Day 1 started fabulously. In spite of our neighbors snoring, I was able to get about 4 hours of solid rest and it seems like Finley got a pinch more than that. Daddy relieved me from my 'shift' and I was able to get out and get some fresh air. I desperately needed it, just to regain a sense of normalcy.
I went down and got a Starbucks and took a few laps around the hospital and Forrest park, down some cute streets- getting some footage on my GoPro for the little documentary I'm making of our SDR trip. Called some friends to tell them our crazy Dog Drama of yesterday.
After a few hours, I went back in and checked on Josh and Fin. My husband told me how refreshed I looked and I really needed that walk. We sat and tried to distract a grumpy girl from wanting to "stand up"... She's really hard to keep down, even with the drugs.
Dr. Park made his entrance very quickly. Again, too fast for me to get documentation of it. (He's like the sneaky butler on Mr. Deeds!)
"How's she doing?" Dr. asked.
"Great," josh said. "She really wants to get up."
Dr. Park smiled, as if to say, she's a strong one.
He left swiftly. I was feeling super good, I wanted to go somewhere and praise God and call my mom! So I went up to the zen garden. I was sitting there thinking how ideal this whole procedure has been. I was smiling and updating my friends via text, when I got a text from Josh. 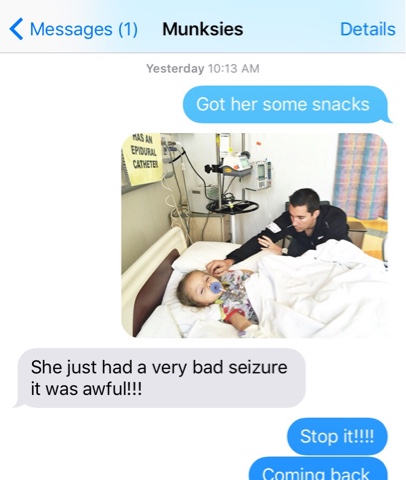 A seizure?!
Right there sitting on that bench, I lost my marbles in the not-so-zen garden.
I could not get up to the room fast enough. We had just seen Dr. Park. She was just doing great.
My stomach was in knots, I was forcing down the wonderful bagel I had just eaten on my outing.
I got back in the room, my Husband looked like he had seen a ghost. The Nurse gave me that look of pity, one I'm all too familiar with. Like she had news to tell me that she knew was gonna rip my heart out of my chest.
I asked Josh to tell me what happened. He recalled the events:
"We were just sitting here and she was talking to me and we were playing.  All of a sudden her entire body started shaking, her eyes were rolling back, and she was making a painful moan... It lasted about a minute. The alarms were beeping and I had to yell for help! It was the scariest thing I've ever experienced. Our poor baby girls. That was awful. Her whole body was seizing."
I was a wreck. I contribute most of my breakdown to lack of sleep and intense fear. To me this seizure signified more than an "unanticipated setback." It signified a long term new medical condition we will have to maintain.  It signified another emotional roller coaster. It also freakishly resembled a similar situation with my dad and mother-in-law; both who passed away in hospitals following brain trauma. To me this was a global event, not isolated.
It felt earth-shattering. I know that sounds dramatic, but I'm just trying to help you understand the severity of emotions I was feeling.
I approached the curtain.  Since we have a shared room, we keep our curtain closed majority of the time. I peeked around the corner and saw my baby resting.  I guess seizures make you very sleepy afterward. She needed sufficient rest, so maybe it was a safety mechanism in her brain, a way for it to hit the "off switch" so to speak.
I had to get away. Isn't that awful? I felt terrible, but I needed fresh air again. I went down to the outside. Breathed deep, slow breaths. Then I went up to the Ronald Macdonald House room- I actually don't remember where I went after that, but I know at some point I was in the RMH because for some reason, I went "live" on Facebook in there. I was practically blacked out, probably due to being in shock. 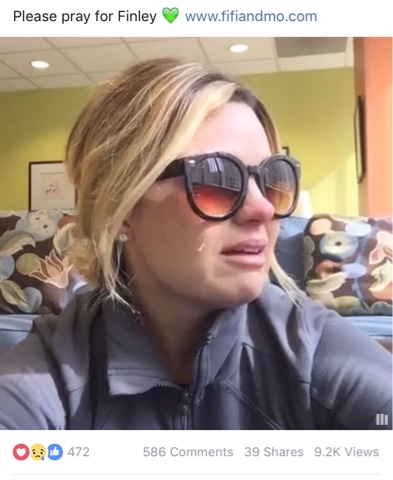 Yeah... That really happened. You sort of just say goodbye to vanity when you are amidst such pain.  I thought about deleting it, but I'm just gonna let it circulate. It is one thing to read someone's prayer request- it's quite another to see a mamabear in pain personally requesting one.
I balled for an hour. I felt like my thoughts were wild horses taking over my brain and I was trying to lasso them. (Again, just trying to paint the picture of what it was like.)
When my dad was in the hospital for FOUR WEEKS, there was an overwhelming sense of peace for me,  majority of the time. Like God was giving me a warm hug, I can't explain it.
This felt cold and like I was alone. This felt like abandonment. This was scary.
I returned to the zen garden to pray.  I know we are to praise God through our trials.  How on earth was I really supposed to worship amidst this type of turmoil. I have no idea if she's going to be okay, literally, no idea.
Saying Christian terminology on a keyboard and living them out are two VERY different things.  But, I know I am a Christian, and everytime I get tested its scary to have to actually practice what I preach.
I got on my knees in the rain and cried.  I listened to nothingness, thinking maybe a comforting thought will come to me.
Nothing came to me.
I tried really hard, like I was able to will it to happen. Like God is a genie, boy was I rubbing that lamp.
Still nothing. I knew I needed to be still. I walked around looking for "signs".  Everywhere up in that zen garden is sad. It's all donated memorials "in memory" of someone.  I thought, oh my gosh, are these the signs that I should be getting?
I took one lap around and thought, I'm outa here! No - thank you! 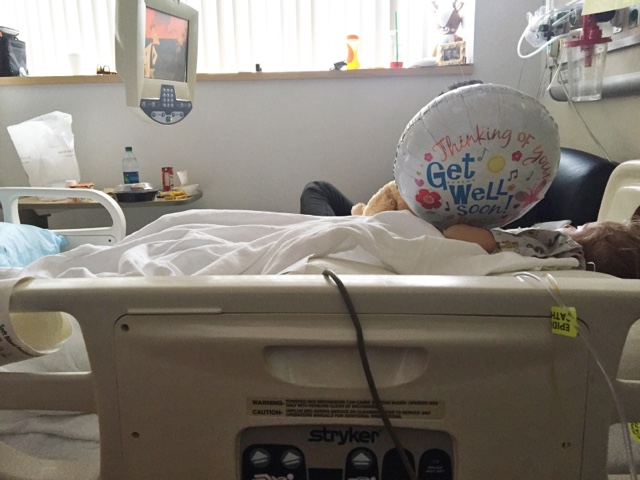 Now, this may sound silly to some of you reading this, and I honestly feel silly saying it, but if you experienced the moment with me, you would totally think I was being logical by "looking for signs."  It's basically what you do when you don't know what to do and time HAS to pass somehow.  You hate living those moments, I wish I could have just gone to sleep and woken up when everything was okay, but that wasn't an option. Because, what's sleep?
I felt bad for just abandoning my husband and daughter, so I returned to the room. I need to be a big girl and face this.  I went in and sat with them, we cried and talked and cried some more. Not to alarm Fin at all, she was out of it.
They sent in for an EEG, and then cancelled it. It didn't surprise me. It actually made me feel better, I knew a test like that would just traumatize her more.
She woke up and was in good spirits. Giggling and wanting to eat. Daddy makes her extra happy, so he fed her some Mac and Cheese. Who doesn't feel better eatin' some good ol Mac!?
We were later greeted by one of the Nuerologists on Dr. Park's team. He said that they feel like an isolated seizure is not a cause for concern and testing is not necessary yet.  Since Finley has a history of infantile seizures (last one occurred when she was around 5 months old), the stress of going under anesthesia and the trauma to her body from surgery could have triggered it.
I felt a sense of relief hearing the doctor say that.  Typically I feel like it's always a "wait and see" type situation. I need to TRUST GOD and shut my mind up.
The time came for me to situate myself for "bed time" and for my wonderful husband to go get his rest. Finley was extra irritable and I had the feeling it was going to be a long night.
I prayed to God, "I know I don't feel you, but that doesn't mean you aren't here. Please just allow Finley to get rest."
I just cried some more and texted with my friends, my friends really are the best. They bring me comfort.
Before I knew it, she fell asleep. Not without some head caressing and chocolate, but it happened by the grace of God!  I think I am going to turn off my phone and get some sleep. I texted my husband, "she's finally asleep.  I'm going to rest too."  Poor thing, I gave him a heart attack, he said. Praying for a seizure free night. Hoping day 2 is less eventful.
Posted by Fifi + Mo at 10:30 AM