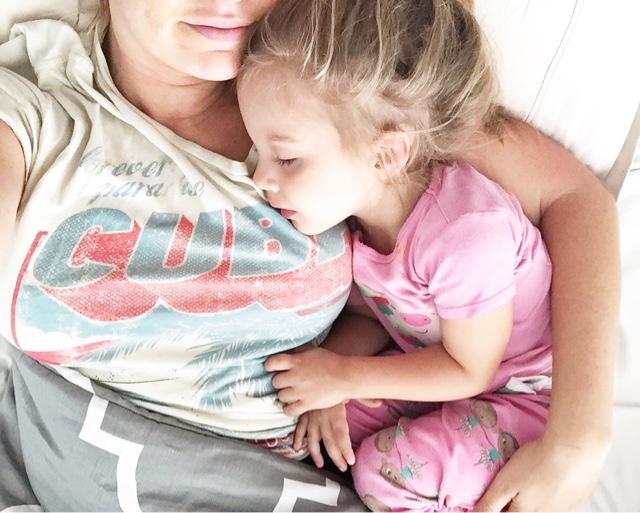 Every now and then this topic comes up and I'm faced with the realization that our sleeping habits aren't exactly typical. I also feel like I should just say, "Hi! My name is Christina and I'm a co-sleeper." when I meet new potential mom-friends. 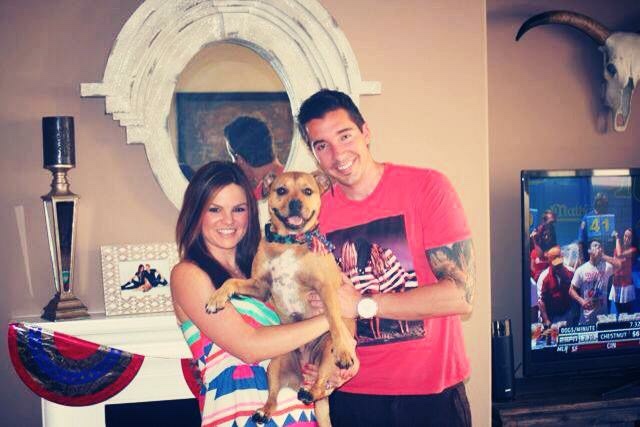 Let me take you back a little bit. My husband and I struggled with fertility. We tried to make a baby naturally and did not succeed. We watched friends around us celebrate pregnancies and births while we remained empty-armed parents to a human child. During this time is when I think it happened. "It" being my lack of concern to be the parent that society tells me I'm supposed to be. 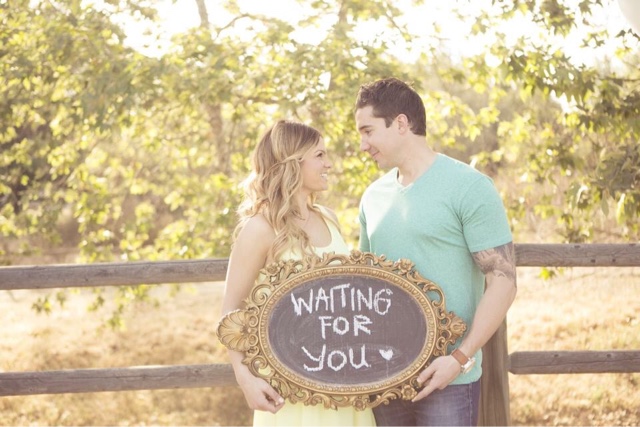 We adopted our little girl from birth. When we were matched with her birth-parents we had already had the gender nuetral nursery all ready  and set up for baby. Little did we know she would never EVER sleep in there. Lol. Well, maybe for a nap or two. 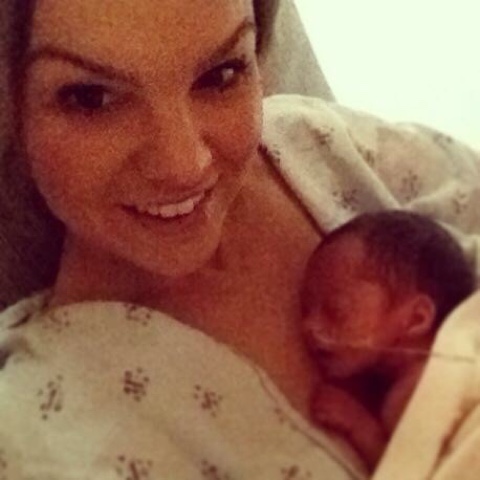 She was born 9 weeks premature. That's over TWO MONTHS early!  She spent 5 weeks in the NICU. Try to imagine a time in your life where you were forced to be somewhere for FIVE weeks. 35 days straight. I sat for hours upon hours every single day just watching her be a little warrior.  I held her skin to skin on my chest and I would breathe her in. I kissed her head so much she should have my lips embedded into her skull. This was the time we were able to bond, which is super duper important in general- but also with adoption, especially of a preemie with a hovering "failure to thrive" diagnosis.
When we brought her home from the hospital it was obviously so amazing for a trillion reasons, but it was so intimidating as far as sleeping was concerned!  A little 5 pound baby is terrifying to lay in a huge crib. 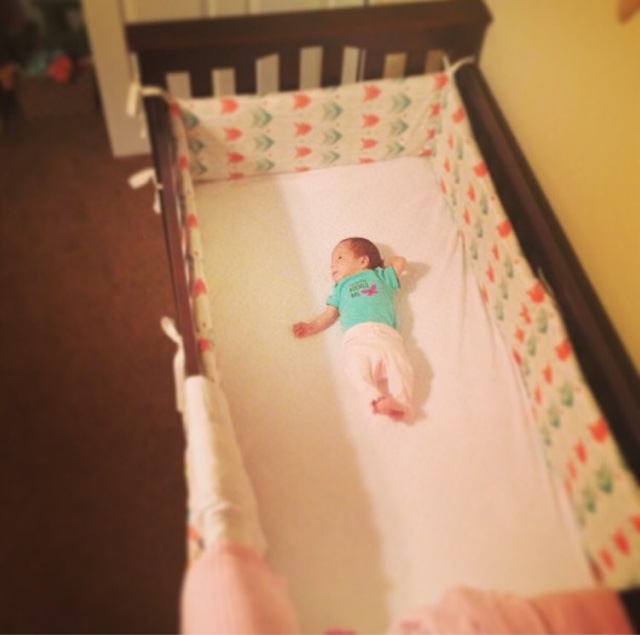 I mean when you are accustomed to those NICU alarms going off every few hours with *breathing apnea alerts, it's enough to scare the crapola out of you for the rest of your life! Now, I was just supposed to bring her home from the hospital and lay her in a crib that's another room away?! I had the angel care monitor and a video monitor set-up, but I just couldn't do it for fear I would sleep through those sounds.
There was a few months, though, that I had her sleep next to us in the bassinet. I was, of course, up every few hours because she was a tummy-sleeper and it petrified me because that's not what we are supposed to do. (Even though that's what our parents were told to do.) I know this because of all the sleep-train advice I received along with books and more advice, and did I mention more unsolicited new-mom advice. (I know, I know... politely insert eye-roll.) 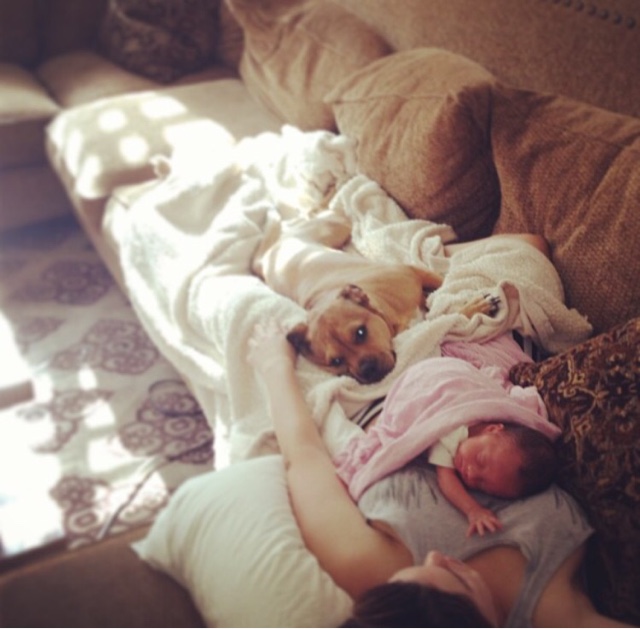 I can't tell you when we made the full-blown transfer to co-sleephood. I know for awhile after she turned one, we attempted to put her to sleep in the crib and then when she would routinely wake-up after 3 hours, I would just bring her in bed with us. A- because I wanted her to get a good solid nights' sleep (she would do that in our bed) & B-because I missed her, okay?! (I can admit that). 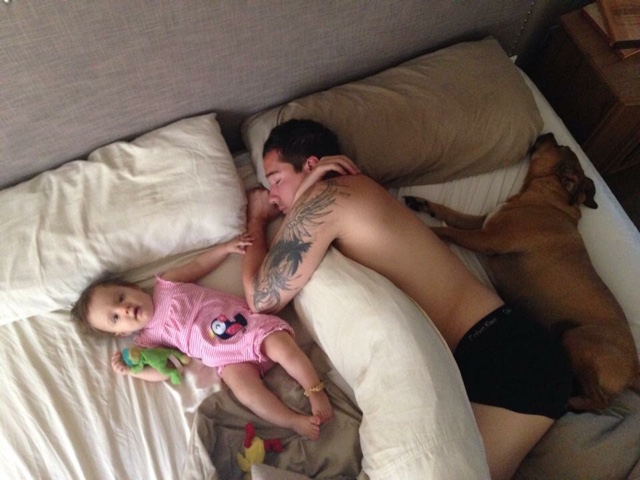 I also feel the need to mention.. At one year old Fin could not go from laying to sitting up on her own. Her muscles got tighter in her sleep.  If she needed to roll over or sit up to get a burp out she couldn't, so she would cry. A painful cry, not to be confused with one of those pesky "manipulative, I need you" cries.  I would just flip her over or rotate her hips a certain way and she went back to sleep (this happened probably two or three times a night).  It's very common with Spastic CP to have muscle aches, restless legs, and disturbed sleep. These are all factors (or you can call them excuses) on how we came to be co-sleepers. 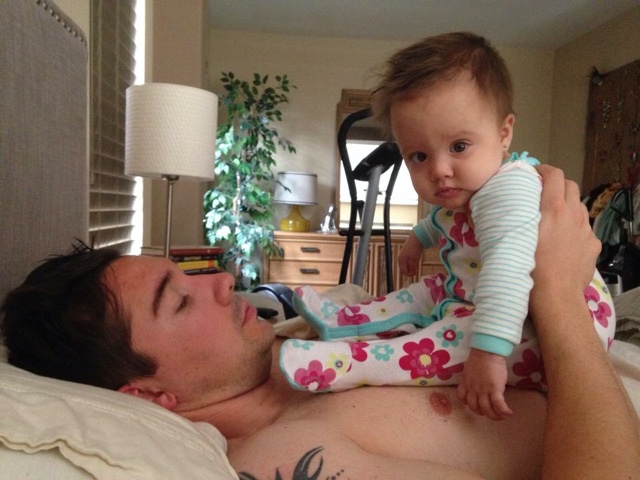 Co-Sleeping has made adventuring and going places easier. She falls asleep anywhere, all she needs is her mama! So that has definitely made for great travel experiences and overnight trips. (And TMI but, mommy and daddy still get plenty of 'quality time' together if you know what I mean.)
When we moved into our new house last year, we sold the crib.  We haven't gotten her a toddler bed yet. We will get one soon though, because after her surgery she will be able to get herself in and out of a bed! {See my last blog post to read about Finley's life-changing surgery and how you can help by Dancing!}  We want her to soar and have independence! Though, I know I'll probably cry myself to sleep on the floor next to her. I've always wanted to do my best for her and I believe that what we've been giving her, our best. 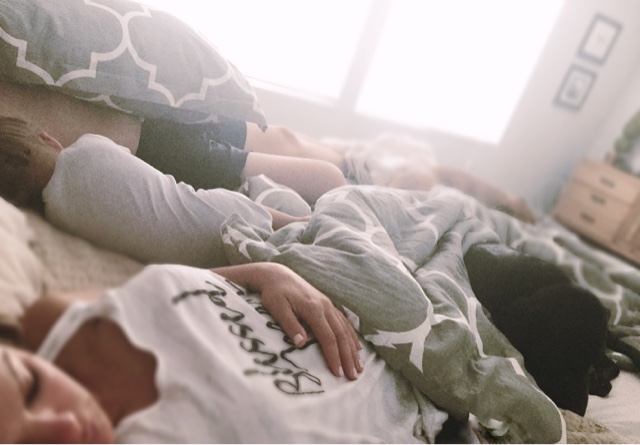 [ Me "fake sleeping" 😊 On average she is currently sleeping 12-13 hours a night and taking no naps. I know, I'm now grieving the loss of nap time😭. We all miraculously get full nights rests with 5 of us in the bed. Haha- doggies too.]
Posted by Fifi + Mo at 9:20 AM